Hey. It’s been a couple of weeks since we caught up last but I’m glad that I’ve finally made the time to sit down and write. Training wise the past couple of weeks has been pretty much consistent and I’m still pretty sharp. I’m keeping my fitness up running and I cannot wait for the gyms to reopen. Some are saying July, but we will see.

It’s been a crazy year alright and a stressful one. It’s also been one full of immense change, a lot of which has begun from the ground up. That’s why after the brutal and undeniably cold-blooded and racist murder of  George Floyd on the 25th of May by Minneapolis officer Derick Chauvin, It’s been liberating, heartbreaking and inspiring to witness worldwide resistance to police brutality and racism.

Being mixed race (my dad is South African and my mum is white) black liberation and civil rights is a cause that is very close to my heart. In 2018 I had a piece published about me in Mixed race faces  that gives a nice explainer of my heritage and how I feel about it.  My dad survived the white minority’s supremacist machine in South Africa and both of my parents have always been firm believers in taking a stand against injustice as have other members of my family. I guess it runs in my blood. 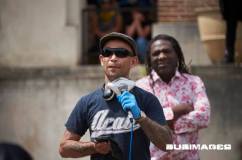 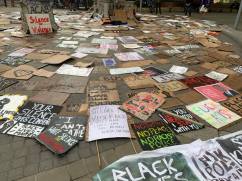 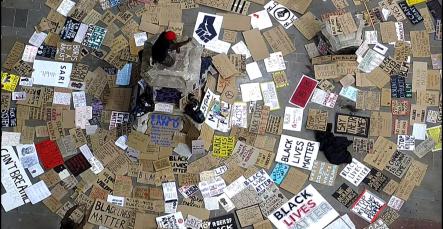 Journeys. Thai boxing for 14 years to speaking on 10,000 strong protests.

Last Sunday I headed down to the Bristol Black Lives Matter protest that was starting from College green in the city. I’d been asked if I wanted to speak at the event and feeling as strongly as I do about civil rights and anti-racism (it’s something I believe in and have always believed in fighting for)  I was really happy to have my voice heard.

I spent the best part of the week leading up to last Sunday getting my speech together, not really knowing at first how to express myself but finding after a time it just seemed to flow. I let my heart talk because when I watched George Floyd’s murder my heart broke. I burst into tears and an outpouring of grief I wasn’t expecting caught me off guard because the monster on the video killed George because of his colour.

Police brutality and white supremacy were in action, shaking hands like the best of friends. Over the course of that week, I reflected on my own experiences with the police over the course of my life and the ongoing fight for justice I’ve found myself on for over 2 years now. I thought about my family in the US and felt liberated watching the abolition and defund movement voices become louder and stronger.

You see I’ve learned over time, the police are not here to protect you. I’ve adopted a staunch abolitionist stance over the past year or so of my life and sincerely feel we need an alternative because the problem has become policing itself. As they often say the UK is not innocent which is why I find it liberating that Minneapolis is abolishing its police force.

If that’s too much for some of you (it probably will be) then I’d suggest taking baby steps and learn about the origins of the police and why they will never change. My speech, in the end, was highly charged and very powerful I’ve been told and resonated with many. You can catch some of it here.   I think in a couple of weeks time I’m going to publish the whole piece via this blog and I have a feeling it’s the start of a new journey for me

Like Emma Thomas, I found it empowering to speak in front of so many people. Listening to the other speakers was truly amazing and there were so many important voices that I thought I was going to be overcome by tears before I was called up.

The march in itself was fantastic and strong heading through town and out to Castle Park. Talks and music went on for what seemed like forever and it was almost like a pandemic had never even happened. When I found out later that day that the statue of notorious slave trader Edward Colston had been torn down   I knew something important was beginning. Resistance, when it blossoms, is a truly beautiful thing.

This week I’ve watched with enthusiasm as the statue of Robert Milligan was taken down in Oxford and being honest, I can’t wait to see all of the nefarious figures from Slavery’s shameful past fall. It makes me smile inside to know that I’m still just as hungry for change as I was twenty years ago. They say you’re meant to become conservative as you grow older, I’m just thinking of more reasons to eat the rich. It kills time in between the home training and waiting for my camp to reopen hopefully in July.

You know, martial arts and activism is a journey, and both are long ones. Like my parents have said we just have to hope what is happening now continues its momentum because “another world is not only possible, she is on her way.”(Arundhati Roy)  have a good week, train hard, and just like the last time… I’ll see you on that road.

(Thanks to Black Lives Matter, Bristol Rising for the speech photo, some are my own and thanks of course to independant media outlets for the last couple.)