Sometimes it feels good to be back on the horse,this week has been one of those weeks. I’ve finished off training with an unintentional 11k run this morning.Before you ask how can that possibly be unintentional, I just sort of started and didn’t really want to stop. It’s like that sometimes.

Next week is going to be a step forward from this one as I’ve started to shake off the complacent feeling that was rapidly settling in. A comfortable familiarity that pisses me off no end with training, because it means I’m getting dangerously near a comfort zone. When I say ‘a’ comfort zone I mean my own.

So I’ve been thinking about what I can work on other than the other than the obvious to ‘step my game up’ as they say. It’s not always an easy task. The thing is with Muay Thai, is that just like with other martial arts there’s a lot of repetition. We do this to hone everything so it’s razor sharp, but I’ve learnt that razor sharp doesn’t just apply to the techniques I’ve been taught over the years. 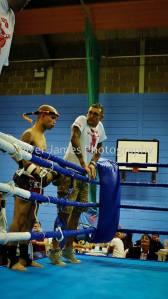 Just recently, I’ve been reading Mike Tyson’s autobiography. In fact I’m still reading it at present. What’s stood out to me is that from early on in his fighting career there was two people at play. Mike the kid from Brooklyn who made it, and Iron Mike, the fighter we all know who spent most of his boxing career knocking people out left right and centre.

He spent endless amounts of time with his trainer  Cus D’Amato developing ‘Iron Mike’ and working on his mindset. He saw himself as unbeatable and in the end it became his truth. In the same respect, I’ve been told before about a fighter who spent two years losing fights. Being hammered, hurt and nearly broken over and over again. In the end he became a European Vale Tudo champion and a fighter everyone else avoided.

I’ve found that every time I’ve competed and it didn’t go my way it’s made me a little stronger inside, and a little more determined to be better than I was before the next time round. But maybe that’s just me. No matter what I get hit with be it physical or emotional, I will always get back up. And when it comes to pre fight preparation I make sure that these days I spend some time focusing on what I want, rather than the negatives.

I guess really that’s what I enjoyed the most about today’s run. Without focusing or ‘intending’ (although that’s important too) I found myself visualizing what I wanted the most out of both my training and fighting career. To improve, and of course to win. So I saw myself doing both. All my other thoughts I simply let pass me by, and I ran and I ran. And I grinned because I saw what was possible.

Fighting for me is very much about being a different person in the ring than I am out of it. I’m almost positive it’s the same for the majority of people I’ve met who compete over the years.  As an old friend of mine said to me a while back, there’s no place for nice guys in the ring. It’s a brutal sport and it’s not for everyone. So I think I’m going to do my best to start to leave the nice guy at home when I’m at the gym (I do have the odd day when I really don’t want to get punched in the face.) and set my intent. Especially when I’m fight training.

I’m going to make sure that next week I also take that determination to succeed with me into the gym. Finding the fire you need for Muay Thai is never an easy process, but I think that when you want to succeed and do a little better than you did before.. well that’s half the battle won. Train hard and as always, I’ll see you on the road.