This week has been a good week. I think some of that is due to a Saturday in the sun that resulted in a trip to the museum which was nice.  I took in everything from dinosaurs (dinosaurs are awesome.) to Chinese art pieces from many years ago to a bit of Banksy and even put my anti-colonialist hat on whilst taking a look at the Benin Bronzes,  stolen by the British many years ago from Benin palace in West Africa. Here’s to then being returned to their rightful owners soon.

I was also fortunate enough to get myself down to the Palestine museum in town which is always a very educational and very sobering experience run by some good people that believe in helping others.  My kind of people. They are in fact so nice they gave me a lovely slice of melon when I left and I’ll have to catch up with them soon. The Palestine museum is an important place in the city and covers many different elements of the ongoing fight for liberation.

What was really inspiring was reading how Palestinians train in and practice Parkour and how it’s become their vehicle to freedom.  It has also become one of self-expression teaching those who practice it that nothing is impossible.

“The idea of parkour is to “find your own way”, and failure became a victory in itself; proof that you’ve tried and learned. The lines blurred until all obstacles in their lives became walls, waiting to be overcome. With renewed fervor, they attempted to better their lives, elsewhere and outside of Gaza.”

The above quote strikes a cord. When a cord is struck I remember that many people are on the same mission as me and it’s inspiring to read about those in the most unbelievably hostile of environments who keep resisting any way they can. Besides, when it comes to all things martial finding your own path is the order of the day. Liberation through sport makes us free. One of the ways I find my own personal freedom is through Thai boxing.

I’ve learned a lot through failure and I agree that it can become a” victory in itself.”I know that if I wasn’t learning I’d be doing something wrong. Of late in training and in day to day life I’ve been working on shutting down the internal dialogue and have done my best to stay in the here and now. Today I spent some time when running focusing only on the run. The sound of my feet on the concrete, the trees and the plants around me and the water in the river. 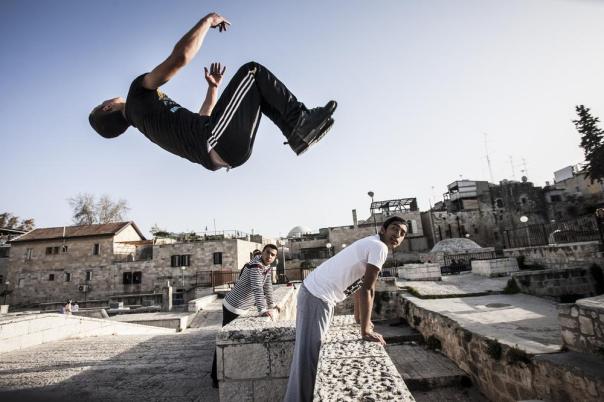 I know I am not my thoughts but thoughts can get in the way of a lot of things sometimes. When it comes to my training they can mess with my flow and make me doubt myself and what is already ingrained and inside of me. When it comes to fighting thoughts can affect how I fight and how I feel about competing before I step in the ring. It’s important in this respect to keep my mind clear. To stay focused. To remind myself of who I am, to be more like the Palestinian parkour players and always resist and push through the negatives.

I’ve noticed that when I’m fighting the noise switches off and I’m only ever-present. I want to be able to apply that skill to the rest of my life. The past is always the past and the future hasn’t happened yet. What happens in the ring over 5 rounds can change in instant and I know inside that what happened minute ago is irrelevant when compared to the last ten seconds of a fight.

Training, focus and mindset is something that I’ve come to realize is a big part of fighting. I think from next week onwards I’m going to start to shut down the inner critic so I can be at my best before the next opportunity comes around. When the voice stops I’m a little closer to being truly free. Have a great week, train hard and fight easy. I’ll see you on that road.