Evening all, I thought I should check in. Monday seems to have become the new Sunday so I’ll do my best to get things back on track this week onwards. Procrastination may be at points the bane of my life but some days I’m just lazy. I guess I’ll let me off.

Some of the guys from my gym were fighting over the weekend. We walked away with a couple of wins and a loss but all fights were top notch.  It would be good to see some decent female fighters emerge from my camp, and speaking of them it was quite inspiring to discover that Sylvie Von Douglass-Ittu won the IPCC world title after fighting Nong Benz Sakchatree last weekend. 🙂

If you check out Sylvie’s Facebook page you can catch the highlights and the fight itself there! Like all the other fights I watched over the weekend (sadly only on video) it was a great fight and it reminded me that you really can’t beat knees! it’s good watching someone win with something you know you’re good at yourself when you practice enough, and I guess I felt the same way when I also watched Janet Todd stopping Wang Chin Long with low kicks as well.

In both instances, the first thing that flicked through my mind wasn’t “I wish I was that good” but rather “I can do that!” it’s important because the other fights I watched made me realize if I keep training hard I can get to a much better level and achieve a lot more, but seeing tools I want to drill effectively winning fights makes me realize I’m thinking on the right lines at present. 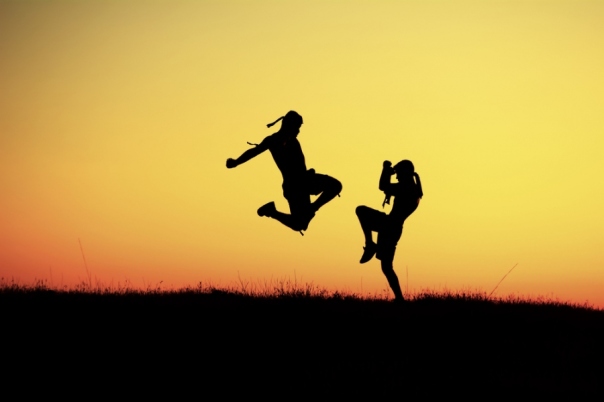 I used to spend every sparring session trying to find my way into the clinch in at least one round and because my body kicks have never been particularly top notch I used to spend a lot of time working low kicks too. The latter is still kind of same-same although I do try to land more body kicks than before but being honest,  it would be good to get back to getting good at clinching. I’ve never been anything spectacular but I can destroy people with my knees. Thanks for reminding me what a good tool they are Sylvie.

When it comes to looking for inspiration I’m a firm believer that it often appears when I need to find it especially when feeling marginally unmotivated or perhaps a little despondent after a tough bout. I got a pasting in my last fight so ever since then I’ve been asking myself what I need to do better.

The problem is when it comes to fighting you can never tell what’s going to happen until you’re fighting. Maybe thinking outside the box a little bit more in training will help me cope better with the unexpected next time around because being honest I didn’t expect him to be as good as he was. But I guess that’s a good thing. It means I learned something and when I’m learning I know that I can only get better with time. To me, that’s truly inspiring and a motivator to keep doing what I do.

“All I want is to improve, to get better as a fighter and to eventually be able to look at myself and say that I’m a great fighter. It’s a process and, for me, it’s slow. But I want it so badly that I am willing to risk failure. I’m willing to risk losing, to risk being bettered repeatedly by opponents who have advantages over me, because I want so badly to get better. And I do fail – I lose and I get my ass kicked. And I don’t always see or feel the improvement; I just have to have faith that it’s there.”

It made me realize that everything I’ve been through and most importantly achieved with training and fighting, every victory in and out of the ring is part of my journey as a fighter, it’s a process of self-improvement that doesn’t just reflect on myself in the ring but reflects on myself as a person too. I’d rather learn the hard way and come back stronger than not learn anything at all.

Some of my biggest strengths lie deep in my experience and my journey as a Thai boxer so far. I may not ever reach the level of the women I’ve talked about in my blog today or be as good as the guys from my gym who were fighting at the weekend but you know, I’ve started to remember that if I really want to look for inspiration sometimes it’s ok to look no further than myself. When you strive to be the best you can be the world becomes yours. All of us are living proof.  Have a great week, train hard and just like the last time.. I’ll see you on that road.