Well, here we are again you and me. It’s good to be back on track. I’ve just come back from a fat fighting run of only 3 or so k but it was still hard work. It’s pretty warm out there at the moment so I decided to head out with a hoodie on to sweat a little more than usual. It’s how I’ve always managed to get weight off. Training hard, running lots and ok well, cutting out the booze and eating (reasonably) right. I’m lucky enough to have been blessed with a high metabolism so after a while the weight just starts to fall off.

I’m fighting in 3 weeks yesterday so that gives me a couple of weeks to really push and bring out the best in myself. Luckily, I’m starting to get sharper. Kicks can still be too slow but they are strong and the technique is better. I usually find when I’m actually in there I respond well anyway. Sparring has been going well and everyone whether they know it or not are really pushing me.

I’m not going to go into the ins and outs of what’s improving and what’s not on here. (there’s nothing like giving your game away) but suffice to say I think slowly but surely I’m going to end up teaching myself some new tricks. It’s never going to be anything at the level of ground breaking as I’ve been training and fighting for a long time and know myself but I can still build on what I already have logged and most importantly, what I know works. 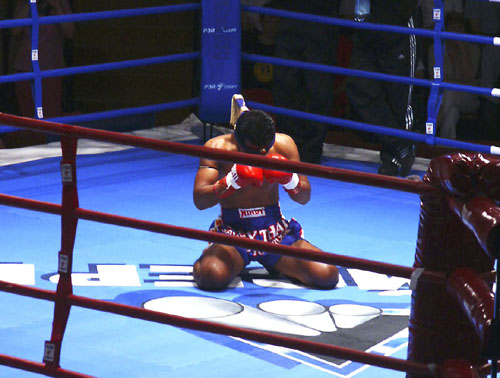 When it comes to fighting I’ve remembered it’s really important to keep it simple and also to remember that  regardless of what level you are fighting at basics will see you through. I guess that’s why it’s important to have a strong foundation as well as a big heart. I’d rather be a fighter that may not necessarily be spectacular to watch but that gets the job done vs throwing cartwheel kicks that don’t land. (as an example.)

Having a strong foundation combined with a good defense is something I think is enough to help me win my next fight and ideally win some more after that too. When I’m close enough I can start to apply pressure which is one of my strengths as a boxer. A good defense and counters can help me close that gap. Maybe I’m giving my game away a little.. but I love talking about what I do. It has been and always will be good fun. If it wasn’t then what would be the point?

So keeping in the here and now (it’s always the best place to be because the past is the past and the future hasn’t happened yet) I’m looking forward to rounding the week off later. Training next week needs to be a real push and the week after that too. No one said it’s going to be easy but ultimately it’s going to be worth it. I thought I’d leave you this week with a video I came across from a few years back. Pornsanae Sitmonchai training for his fight in Ireland against the formidable Rungravee. See? Super simple stuff. Have a good week, and just like the last time.. I’ll see you on that road.