Last week. Well that was interesting. It was also awesome because I spent the best part of the week at the gym. I’ve finally got back to my space of training 4 or 5 times a week again plus running a couple of times too. In fact I’m going to do that later.

Sorry to be a little later than expected by the way. The best intentions of Sunday do on occasion spill over into the next working day (or even the day after that) but being my own boss I can invest a little time into doing the second thing I love the most which is of course writing. Yeah. I need to get a lot more of that in my life.

I’m pleased to say I’ve decided to have a little break from the blue peril (Facebook ) for anything other than business related stuff and hope that  it’s going to let me get the focus I need back in other areas of my life including writing and training. At the very best it’s an entertaining distraction and at it’s very worst it sucks the life out of me. The sun’s shining and there’s people and stuff.. yeah. Let’s do that! If you catch my blog on the regular then you’ll still find it in it’s usual places outside that little world.

Getting back to all things martial it was good to have spent the best part of last week training and the week certainly finished on an interesting note. I’ve mentioned before I occasionally train at the weekend with some mates and last weekend I got sbown and I like to think learnt a bit of Tai Chi boxing.

It’s one of those martial arts I’ve always respected but have never really known a great deal about but on a couple of occasions I’ve seen what it can do and have been impressed. One of the more impressive instances was when an old friend of mine sent me half way across the pub he helped manage with what seemed like a very simple strike to my chest. You learn humility in the funniest ways sometimes.

We worked on grounding ourselves so it was harder for someone to disrupt our balance “qigong” and also practiced a couple of drills, one of which is logged in my subconscious and even sitting here writing this now I can see myself doing. That’s good. In fact that’s excellent. I’m a firm believer in keeping my mind open when it comes to martial arts and it’s always good to think outside the ring and in the real world as such.

What’s also interesting is the similarities in Tai Chi striking and Muay Thai striking. In both instances the key is really to stay relaxed to generate the most power and from the little I was shown it seems that like with Thai there’s real economy in movement. I liked the way a simple sidestep out the way of a punch opened up a whole realm of possibilities. I guess that’s kind of like Muay Thai. There’s always a lot of ways to answer back.

And just like with Thai, my friend made it clear then when you respond it should be a sequence of attacks. One flowing into another. Even though we only trained for a couple of hours it made me realize how rigid and stiff I can be sometimes. All my trainers have consistently said one thing to me. “Relax.” I find myself saying it to newbies at the gym from time to time when holding pads so I know I’m not alone and just like everyone else I’ve got a lot to learn.

This week I’m straight back into  the mix and it’s good to be able to train 4 or 5 times again at my current gym. They’ve started doing Saturday sessions which makes me happy. In terms of fighting overseas the opportunities there and I’m hoping I can get out there this weekend to have a bit of fun.

I also should be fighting in July in Wales all being well. That one like the one ahead is a work in progress. How do I feel about fighting again? Up for it. I’ve gone from a little uncertain to realizing how much I miss it. You can’t beat a good challenge. Even at the scary points. It’s nice to keep things varied with training  and I think it plays a big part in staying motivated and focused just like working towards a fight does. 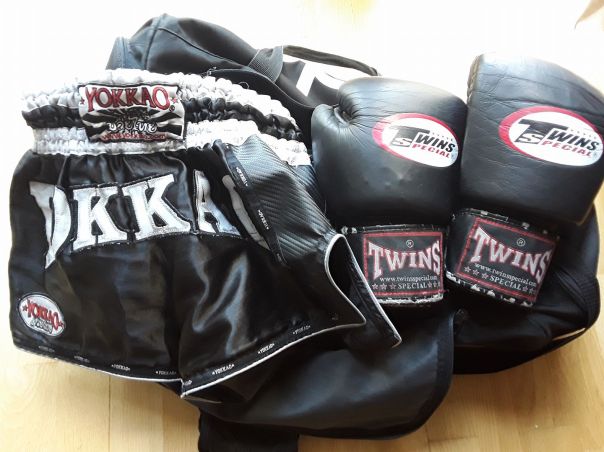 1 thought on “Well that was interesting.”