The first round of the fight starts well. I feel light on my feet and my heart is pounding with the adrenaline of confrontation. It’s here that the make or break happens. In the ring, you don’t have anywhere to run or hide. These days, I’m just as hungry as I always have been and last minutes nerves are put to bed as soon as the first exchange happens.

I land some nice clean shots in the opening exchanges, and what my opponent throws that lands I barely feel. At one point a right body kick comes my way, and I catch it countering with a left cross. ‘Yes.’ I think to myself for a split second. It’s something I’ve drilled constantly in sparring and I’m pleased it works when I need it the most.

Being a southpaw always has it’s advantages  in sparring and in fighting. Every single person I’ve ever fought has been an orthodox fighter. Bam bam BAM! in quick succession I throw a simple combination I know all too well and it’s one that works. Jab cross and a low kick. The first combination I ever got taught. Except recently I’ve changed it to a right low kick instead of left.

I always smile inside when I see their leg buckle with that kick. They never see it coming. I can hear Lee shouting at me to attack with my left leg. ‘Left body!’ so I go for it. It’s not a bad kick but Marcin checks it. He’s answered back with some good shots of his own but he looks nervous.

He’s back off towards the corner of the ring. I head towards him walking forward. We exchange a few more times. Left low, left body a few punches. This is good. I think I’m winning. Somehow I end up with my back towards my corner, and have backed off a little. I’ve been moving well and.. the flurry of punches catches me completely off guard. Marcin rushes me seemingly out of no where punch punch punch punch bang through my guard.

Suddenly, just like  in February I’m on the canvas. It’s not somewhere I want to be so just like before I get up. No matter how hard I get hit I always get up. I get back into guard as quickly as I can taking an 8 count along the way. The ref signals us to fight again and we’re back to square one. This time out of frustration I start to hit back instead of moving. I can hit hard too so I stand my ground. Bam! the punch comes through my guard again dropping me for the second time.

It’s a little harder to get up this time but here I am. I push myself back to my feet again taking a second 8 count. The last dregs of the round pass by as I regain my composure. As the round ends I see a look of concern of my cornermen Lee and Jimpy’s faces.

Lee reminds me I’ve been training long enough now and to keep low kicking and body kicking because it was working.  ‘Out point him! your not going to win trying to box him!’ Jimpy re-enforces this fact before I head out again. A bit of water a spray in my face and I’m ready.

The second round holds more promise than the first. I land some good combinations although a couple of body kicks get my attention. I think they hurt a little this time. Mental note to self. Shin block. Suddenly, we’re tied up in the clinch. Marcin has a slight height advantage over me but I’m holding my own.

First of all I feel a little too close to knee. I want to catch a knee and sweep but it doesn’t seem to want to let me today. I take a couple into my ribs (this guy doesn’t seem to have much power with anything bar his hands) And answer back with some solid knees of my own. I keep kneeing when I think there’s an opening. We bounce against the ropes the ref breaking us before raising his hand for us to fight again.

Even when it comes to exchanging I seem to have the upper hand this round. No tit for tat. We clinch again and I realize that I’m stronger. This has always been my strength as a fighter. Besides, its stopping him from using those dangerous hands. I throw some more knees and they don’t feel like their doing anything but I can hear Lee and Jimpy going nuts. Then it’s the end of round two.

Lee is grinning from ear to ear as I head back to my corner. I suddenly realize I am as well. ‘ much better. See? Next round same again but clinch and knee? ok?’ Jimpy nods enthusiastically. I enjoy the breather. Still feeling strong I head back to the centre of the ring for round three. The cheers of the crowd make me happy. They are loving it. I think I can beat this guy.

Round three and four are a  war. No question of that, but I’m loving every minute. Round three sees more time in the clinch than before and I finish strong. In round four at one point I foolishly let my hands drop too low as I chase Marcin towards his corner.

‘Hands Marcin! hands hands!’ I hear his trainer Sonny yell. He comes back strong, rocking me  with a  punch. I hear the reeeeeeee noise and white stars appear briefly. That was close.A little too close.

Marcin is on the attack now, I throw a left hook of my own (it’s a punch that has always had a lot of weight but needs a lot more technique. These days since I turned it into a Thai hook it’s a little more effective than before) it catches him clean in the temple but doesn’t seem to do much.

But I’m pleased, mainly because I do that clinch and knee thing Lee told me about a minute ago.I rush him getting past a couple of punches and pull him tight into the clinch.

As soon as I’ve got the grip I want I lock it and start to knee. We’re up against the ropes again, and this time I know I’m hurting him. My left knee is doing more damage than my right.

I can feel him folding slightly and keep working. We break the clinch again and he comes back with some solid attacks. I think I counter well  all I know is that tonight as planned  is all about my left leg. Good old lefty. Always there when I need him the most.

I throw a teep that lands well for the first time in the entire fight. In fact it’s my only teep of the entire fight. It keeps me out of trouble from those hands. Marcin throws a heavy low kick and I shin block. Suddenly he’s on the canvas. Did I just drop him with a block? I stand over him feeling confident as he quickly gets to his feet. He looks tired. I feel tired. But I won’t give up!

Almost in the next room I hear Lee yelling ‘left body!’ I throw one that Marcin blocks easily, and then a second that he checks but wobbles him. ‘Yeaaaaaaah!’ I hear my corner yell. I’ve been told before in Thai that even if an attack is blocked but it rocks the opponent you still score for it. I guess that’s something.

We get into the clinch again in the last 20 odd seconds of the round. This time Marcin is taking no chances. He’s landed some good knees of his own but this time he  puts his leg across my hips to stop me kneeing him. I come up onto my toes a little more and bring a lovely right knee slamming into his ribs over his guard. Somehow I get around the block but I’ve done this before. I put it down to 99.9 determination more than anything else. I’m hurting him. This is good.

We’re against the ropes again and the ref breaks it. A second or two later and the round is over. Lee is positive. ‘It’s yours it’s yours’ they both say almost together. ‘Draw at least..’  ‘you need to have a big round mate! you’ve come back well’ Lee says ‘you need to give it everything in the last round! nearly there! He’s knackered! ‘ They give a quick spray of water and tell me to rub my feet in a little spilled water in my corner.

I head back out ready for the infamous round five. I look at Marcin and their right. He looks bashed up and tired. That’s my trademark right there. Those red marks on his legs and body.Looks like a trains hit him.

My legs throb a little but the adrenalin takes care of that quickly. As the round starts I realize I feel tired but still strong. I go for the clinch again almost immediately but he pushes me away quickly. He’s not going to let me play that game again.

This time the round feels a lot more tit for tat than before. I realize almost too late that this is his game plan. Keep me away and try and pick me off. He throws a right body kick again and I go for the same counter. This time he pulls his leg out quickly. He teeps me back a little as I try to catch the teep at the same time. It’s the thought that counts. It’s another one I seem to pull off well sparring.

I come back with some strong kicks and punches but don’t seem to find the opening to get back into the clinch for the majority of the round. As always I keep coming, not giving up and keeping the pressure on. It’s one of my strengths as a fighter. Some find it unnerving. I know it’s because I’ve got a head made out of metal and I like a good fight.

The round draws to a close and Lee and Jimpy look pleased but a little disappointed too. I am as well. I had that fight. I could of beaten him. Maybe I have… Marcin walks to his corner with his hands raised and I do the same. I go and say thanks to Sonny and thank Lee and Jimpy again for watching my back today.

We come to the centre of the ring and face the cameras waiting for the decision to be made. It’s a split decision and a very close fight But ‘after that war!’ the decision goes to blue corner. I’m disappointed because I know there was more than one moment I was winning back there. I congratulate Marcin. ‘Great fight brother thanks’ He’s a warrior the same as me. We all are.

It’s been a good week off, and next week as always I’m back on that horse. I will be fighting again soon. I’m very pleased with how I fought and would like to Thank Eagles gym for having me and for being in my corner.I hope I see you all again soon and big respect to FSC and Marcin.

I feel like I’ve  learnt something and I’ll get back on the winning track soon. After all what don’t kill you… well it only makes you stronger. Have a great week, and keep your hearts big. I’ll see you on that road. 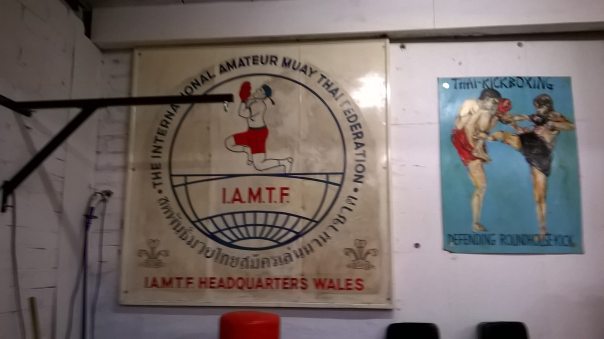