This week as always has been a good week of training. It’s been a full week that’s pushed me and I’m pleased that my fitness is up to scratch and training is moving in the right direction. When you put in the work it usually does. I thought I’d approach this week’s blog with a slightly different format than normal, so rather than give a round up of what’s been making me tick this week I’m really thinking about what it takes to make a fighter.

We’ve all got our strengths and weaknesses but in my opinion there’s common denominators that define all of us no matter where we’re at. So starting from the top, I’ve found that when it comes to competing fundamentally you need to have..

Good fitness – It’s a well known fact  that Muay Thai is one of the tougher forms of stand up fighting out there, and fights can go the distance or be over in a few minutes. Either way, when I’ve stepped up I’ve always known that my fitness needs to be at it’s best if I want to go the distance.

Be it pad work and drills, running, skipping or good old fashioned bag blasting it all helps to make me a stronger fighter inside and out. And of course then there’s the sparring.  I make sure I train at least 5 times a week if a fight is coming up and although every day isn’t always perfect I make sure every week is worth my time.

Heart and mental toughness – One of the characteristics that really defines a fighter is having ‘heart’ or the will not to give up and keep fighting. I’ve watched some incredibly tough fights before where neither fighter has given any quarter, and   I’ve learnt that you don’t just need to be tough on the outside when it comes to competing you need to be tough inside too.

A fight can tip in a heart beat so you need to be strong enough not to give up!. As the saying goes ‘it’s not how you start but how you finish.’  I’m lucky that I’ve never been someone to give up easily and it’s a characteristic that’s served me well so far!.

A good set of tools-  When it comes to training there’s a lot of techniques we practice and drill week in and week out. There’s a lot we get shown, and if your like me and have trained at a few gyms over the years then you’ll appreciate that everyone has their own perspective or take  on things. We’re all doing the same thing it’s just that there’s different approaches to doing it. Fundamentally, we’re all given the same tools to work with and it’s down to the individual to find what works the best for you.

I’ve found that it’s better to keep things simple when it comes to competing so there’s certain techniques and combinations I’ll use a lot in sparring or practise on bags so there registered and ready for when I need them the most. A  fighter should always make sure they have a good set of tools at their disposal. This much is a given. They don’t call it the science of eight limbs for nothing you know…

A good palate – ‘You are what you eat’ as the saying goes, and of course we all know that when your fighting you have to change your diet and make a few sacrifices especially if you’ve got weight to cut. I’ve been blessed with a high metabolism so manage to cut weight quite quickly from running and training hard but in general I eat pretty healthy anyway.

Earlier this year I had to cut to 60kg and found myself on the Riveta and tuna salad road, believe you me it was a long and irritating one. Especially when every time I went shopping all the stuff I couldn’t have seemed to go out its way to get my attention.

Being a good boy I make sure I cut down on indulgences (most of the time) and stay away from booze too when I’m fighting. A good palette doesn’t limit itself to what you ingest but to your surroundings too, so I always make sure I have the best people around me who I know will push me.

Sparring partners that push you and respect you-  We’ve all had the occasional sparring session where things have gotten a little heavy handed and it’s the unwritten rule in Muay Thai (and I guess all combat sports) that sparring is not about destroying the person in front of you but learning from them. How else do you find out what your strengths and weaknesses are and what you can and can’t do?

Like with everything else Thai it’s about continual improvement at what you do, and that’s why I’ve found it’s always important to train with others I know will push me when I need it the most, but know how to keep it on a level. For me that’s crucial especially when I’ve got a fight coming up.

I’m  not adverse to turning it up a little from time to time but only if the person I’m training with is happy with that too. After all, it’s not all about me. Personally, I’m a big fan of how Thais spar with each other but that’s a subject for a different blog.

Focus- Focus and mental toughness are closely related, but without focus under pressure even the best fighter is going to fold. There’s being able to handle a tough fight and there’s also  knowing what to do in order to win the day.

For me focus is an ongoing ‘work in progress’ and there’s lots of ways I like to try and improve mine be it through meditation and mindfulness practice or ‘staying present’  it’s something that’s developing as I do as a boxer.

When it comes to fight day I know that I need to have my ‘head in the game’ so always appreciate time alone to get ready  and make sure I’m coming out at my absolute best. After all I’m not just there to fight, I’m there to win.

A good corner –  For me and I’m sure it’s the same for you if you compete it’s essential to have a good corner when your fighting. Even though ‘the ring is a lonely place’ as Damien Trainor says, the guys or girls  in your corner will see things you don’t about your opponent and hone in on what’s working.

I’ve also found when I’ve had the toughest of fights my corner have told me not to give up no matter what. When your at round five knowing that your team is watching your back and believe in you can help you find that something you didn’t think you had. Thanks Craig and Jon. 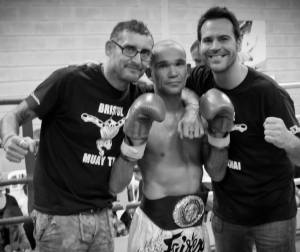 So for me, that’s really it in a nutshell. I’m fighting again in a couple of weeks so next week is my final week of all or nothing. I’ll let you know how I get on. Have a great week, and just like the last time… I’ll see you on that road.