Well, last week as always was a good week of training. Sorry about the slight delay with the blog, but I guess it’s better late than never. I headed home to Portsmouth at the weekend to see a few old faces, pay a visit to my old gym over in Gosport and swing by the Thai festival there too.

In short it was a fantastic weekend, and I was really pleased I did it. It’s nice to get back to where it all began from time to time and having moved as much as I have (due to an underlying need to explore and also because of work) I was pleased to find my old camp doing well and training hard in a new location in Gosport. Despite a major hangover from the night before, I still managed to throw in an hour or so on bags and the pads and was pleased I made an effort.

The gym in itself is in a good location and has that certain feel to it that only Thai boxing gyms really have. In fact, it reminded me  a lot of how it was in 2007 when I first started there, and everything was just.. well new. I’ve begun to step the pace up a little with training again despite (still) working around an injury that’s slowly getting better and I’m hoping that things will have returned to normal sooner rather than later. What I am finding is that some things are still pretty sharp, so I’ll keep working on them to get them sharper. That left kick is getting there again. That’s always a good thing. 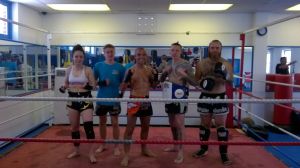 The Thai festival on Sunday was a nice day out, but being honest they are pretty much the same format across the board. That’s not to say I didn’t enjoy having a wander round and even though I only caught a little of the interclub that was happening (from what I was told there was around 30 bouts in the end ) I was impressed with the standard ,and it was nice to see my old trainer Dale and have a catch up.

I also saw Jevin a trainer from Kings gym in Southampton who knows me fairly well. I fought one of his lads a few years back a couple of times. Although he beat me on both occasions, it was probably one of the most exciting fights I’ve ever had (the first one on his home ground was better than the second on mine) and in both instances was pretty much a war. The first fight was my third fight and was very close.

My low kicks were doing a lot of damage,and when I kept him away from me I had him in trouble. I worked in the clinch but he was stronger than me, hence the lift then the big throw into the canvas. Trust me when that happens to you about three times in a fight it begins to get demoralizing. I can still remember the beginning of the fight, doing my Ram Muay and walking over to his corner and stamping my foot on the canvas.

Almost from the next room I heard one of the drunken Southampton mob shout ‘fackin slap him!’ when I talked to my trainer Sert about the fight he smiled and shook his head. He said ‘I saw you do that and thought ‘silly boy’  It wasn’t part of my Ram Muay but I was hoping it would make him a little nervous.

It was fighting Dan that got me thinking more and more about clinch work. He kept on picking me up and throwing  me from the clinch the first time, and then he came back and did it again. As well as land a jumping knee in my face. (no it didn’t stop me ) I’ve always said if I didn’t take the fight on short notice the second time around it would of been a different story. So a little ruefully, I’ll say respect to you Dan, you gave me a hard time and I got better because of it. Your a good fighter.

So other than a long weekend in Portsmouth I managed to make sure training as always has been heading in the direction it should be. Later on this year I want to fight again and I’m beginning to get a little itchy which is very much a good thing. It keeps me focused and it keeps me wanting to succeed. At the moment my main goal before that point is to improve and it’s something I’m focusing on intensely. I’m pleased to say it’s beginning to get there too, so I hope the next time I step up just like before it ends on a positive note.

So as always it’s onwards and upwards and I’m sure this week is going to be a good push as always. Last night training wasn’t too shabby and I’m off for a run shortly. It’s the best way to start the day. Have a great week, train hard and just like the last time…I’ll see you on that road.