Another week of training draws to a close. It’s been a tough one and that’s always a good thing. I feel a little sharper than last week and I’m going to make the most out of the next couple of weeks of training ahead. Both camps I train out of have been pushing me this week so that’s made me happy, and I’m expecting more of the same next week onwards.

I think one of the most important factors of fighting other than making sure your fitness and techniques are up to scratch is maintaining a good work rate and having the ability to adapt under pressure.  Beyond that it’s equally as important to make sure you’ve got enough tools in your box to use when needed.When I’ve got the time, I try and watch fights on YouTube and it’s quite interesting to see the different fighting styles of the boxers. Muay Thai in Thailand can be slower paced than western fights, and the fighters that really get my attention are the guys that switch their style when they need to.

A fighter  that stand out to me in this respect is the now retired Pornsanae. Although he did have his well known fast hand and low kick combinations making him very explosive when he attacked, he also knew how to play the waiting game and would switch from fast combinations to powerful single shots when he needed to. He was also a ‘forward fighter’ like myself.  His pace seemed to be  slower at first but when he attacked he was very exciting to watch and had a lot of fire and heart. (I’m sure that he still does.)

One of my trainers has always made a point of saying that we need to make sure we change and adapt our pace in sparring so we don’t fall into the trap of becoming a one dimensional boxer. It’s something I think develops as you work on your own style with Muay Thai and it really comes down to finding what works for you. I’ve learnt and have been shown that there is usually more than one approach to a situation, and really its a case of having confidence and belief in what you know to maybe try something different. I’m getting there myself, but I’ve still got a long way to go.  I’m lucky in the respect that all my trainers will always give sound advice on what I should work on, having had a good amount of fight experience themselves. 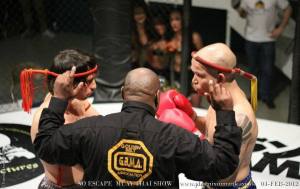 It is important of course when I’m fight training, for me to make sure I’m working on what I’m already know is effective and to keep drilling techniques so there as sharp as possible for the end of the month. Any major changes realistically aren’t going to happen within a three week (at best) period and I think ultimately I can only ever really hone and build upon the way I fight rather than tear it down and start from scratch. Besides, I’m a tough  boxer and I can take the fight to them and hold my own when I need to. Most importantly, I’m happy with where I am at and I’m enjoying the learning process as always.

So next week onwards I know full well I’m going to start pushing myself even harder. The last couple of weeks of fight training is always the toughest but it usually yields the biggest results. Sometimes you have to push yourself over that line to be at your best. I thought I’d leave you this week with a video of one of the most exciting fights I’ve watched. Pornsanae vs the formidable ET. Maybe if we’re lucky he’ll come out of retirement. A true warrior at his best. Have a good week, train hard and always fight easy. I’ll see you on that road.