This week has been a full week of training, and as always every session has been of value. I’ve started to turn things up a little and push myself, and I’ll put my foot down a little further next week onwards. Little by little improvements happen, their usually the ones you don’t see but others do. If you’ve ever hit that slump we all get from time to time you’ll know what I’m talking about but it’s a good feeling to know that as always I’m progressing.

I view myself very differently now from how I did a few years back when it comes to training and competing. In fact I view Muay Thai a little differently too. I’ve trained at a few gyms over the years, mainly because I’ve lived in a few different cities and towns in the Uk. Life being life, opportunities arise and you make the most of them.One thing I’ve always promised myself since I started out on my journey is that no matter where I am, I will always find a gym to train out of. I guess that Thai boxing bug bites pretty hard.

It’s  good learning from trainers with a wealth of knowledge and experience, and also of course training with many different fighters over the years too. The one thing I’ve realized is that when it comes to Muay Thai you learn to make what your taught uniquely your own. I think really that applies to any system or style if you will, that you train in.

I’ve found that fundamentally the more I’ve got to know myself through both training at the gym and competing, the more I’ve discovered what works for me. Sparring of course, always highlights strengths and weaknesses and just recently I’ve found a couple of techniques that seem to be giving people a hard time. That’s always a good thing.

As with most things in life, there’s always different ways to do things so I’ve spent a little time this week reminding myself that it doesn’t hurt to change your approach when necessary, whether that be varying your attacks more or focusing on faster footwork, or better defence. (as examples)  I had a good spar Saturday morning just boxing with a lad who likes to move in and out of range very quickly, so in about our third round of sparring I decided to play the long game and hold the centre of the ring rather than waste energy chasing him. I was quite pleased to find out that it worked, so I guess it just goes to show.

I’ve noticed from watching others sparring and fighting that it can really pay off to be able to change your style or adapt to the fighter who is front of you. I’ve found sometimes you have to meet aggression with aggression from the onset, and other times it pays to take your time before turning the heat up. Like with the rest of training it’s an ongoing learning process, and again I know that ultimately it’s something that I need to make my own. I want to become a fighter who fights with his head as well as his heart. For now, I’m happy with who I am and I know he’s going to evolve into someone better than he was before.

Fighting for me is very much a journey like the rest of my training. I do my best not to measure myself by other people’s achievements and only by what I want and know I can achieve when I put my mind to it. I’ve learnt that I only ever strive to be the best I can be, and what I’m doing right now only ever brings out the best in me. I never thought I would ever have the courage to step in a boxing ring so I guess I’m quite proud of who I’ve become. Just as my martial side is evolving I’m pleased to say the person is too. Sometimes, that’s the most important thing. Have a good week, train hard and just like the last time..I’ll see you on that road. 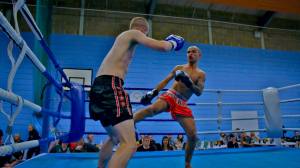