This week like last week and the week before that has been a superb week of training. I’ve been training hard and feel like my fitness is finally where it needs to be. I’ve just come back from a good run and I’m tempted to do another  this afternoon to push myself a little more before hitting the gym again next week. We’ll see how that plays out, but knowing me it’ll happen. You can never train too hard.

Next week is going to be my final week of full on fight training so I intend to hit the gym(s) hard, as the week after that I slow down a little as it will be the week of the show. Time seems to have successfully slowed to a nice relaxed crawl. In fact if it was any more laid back about getting to the 21st of this month it’d be horizontal. So how do I feel about fighting? itchy is how I feel. With a slight touch of nervousness now and again but if I didn’t have that happen then I wouldn’t be a human being.

When I first started fighting it was hard to cope with pre fight nerves, but as time and fights have been and gone I’ve found it only ever gets easier to deal with. As I’ve mentioned before the key for me is always visualization. I keep my eyes fixed firmly on my goal and slowly but surely I’ve learnt to ignore any thoughts of self doubt that enter my hemisphere. All they ever are is fear in disguise, and as the saying goes we all know that fear is only ever false evidence appearing real. 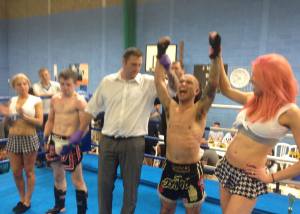 This time round my ‘Mr negative’ has been constantly reminding me that I’m fighting lighter than usual and who knows what that could mean. He’s taken great pleasure in reminding me that I don’t know a huge amount about the lad I am fighting and ‘that kick was too slow’ and that ‘I didn’t put my toes down on that knee.’ When it comes to technique it’s something I know I can correct, and In fact it seems that every little thing he can pull me up on he does.So to counter this I go out there and I prove him wrong.

And in fact I’ve been proving him wrong every single time I’ve stepped in that ring. I’ve learnt to counter any negative that hits with a positive, and these days instead of letting self doubt set in I simply observe it and let it pass. What returns is a sense of self belief and focus. I know I can win. I want to win and really when it comes to fighting, deep down It’s about who wants it the most.

When it comes to the fight itself, I only ever find myself in the moment and don’t let myself focus on a bad round or missed shots or anything else that might try and get in the way of what I want to achieve. The crowd becomes a distant roar and I can only ever hear my corner. (I’ve made the mistake of not listening before and I won’t do it again.) When it comes to the fight that’s coming up in comparison to my last I know that I’m going to need to work even harder to tip the balance in my favour. A draw this time would be unacceptable.

So when running earlier I started sprinting. 10 second bursts increased to 20 seconds lamp post to lamp post and up the hill I’ve learnt to make my friend. As I was running I kept counting the rounds when I got to round 3 and things were getting hard I’d go back to round 2 to imagine I was in the fight of my life, nearer the end of my run I’d let things progress and found that last burst of energy when I needed it. I need to work even harder in the gym next week.

So as another week draws to a close I’m pleased to say I’m looking forward to the 21st. In fact I’m really looking forward to it. It’s a nervous itch that I’m going to use to my advantage and my intention is set. What will be will be and I’ll give it everything I’ve got in the ring and at the gym too. Fighting and training is a long journey but it’s one I’ve grown to love being on. Have a great week, and I’ll see you on that road.