Last week I very briefly touched on the subject of the ‘fight or flight’ response that is ingrained in us as human beings, anyone that fights or trains regularly will know that one of the hardest things about Muay Thai or any fighting discipline in general I guess is developing that killer instinct that’s needed in the ring. The one thing your not able to be is a nice guy when it comes to fighting, and regardless of your nature outside that environment part of training (for me anyway) is about developing the fighter or the warrior if you will who is going to take the reigns when it comes to competing.

When it comes down to confrontation we have two natural responses. Actually, we probably have several but really they come down to this (without going into technical detail as biology has never been my strong point) either we stand our ground and fight, or we flee. The adrenal release that occurs (thanks sympathetic nervous system)  gives us the energy we need to do either.

I’ve never been someone you would deem to be a ‘naturally aggressive’ person but right from the point I started competing I learnt that you need to be able to take control of that moment and harness it to your advantage. Did it come easily? no of course not. In fact in my first fight the lack of decisiveness to keep attacking cost me the bout.  It took me some time to understand the importance of pressing an advantage when it comes to fighting and to start to get to grips with turning that nervous energy into positive destructive intent. I say destructive because I’ve always been taught in Muay Thai you should attack to destroy. As an old friend of mine once said to me ‘it’s not a tickling contest son.’ 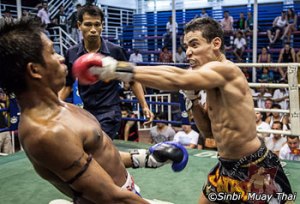 The last fight where I feel I really took control of this was my title fight last year. Everything I threw I was throwing with venom and intent (mainly my knees but some good kicks too.)  and as soon as I knew I had the upper hand I pushed even harder. Despite the adrenaline I felt calm and in control and knew what I had to do to win. On the flip side of the coin, it took me four rounds in my last fight to really switch on and take the fight to him, and although I wasn’t happy (and being honest I’m still not when I think about it) about how I fought last time round, I still took a lot away.

I’ve mentioned before about the importance of keeping things simple when it comes to fighting (something I have always had drilled into me by trainers old and new) so just for a moment let’s look at things on the flip side. When your in that ring and your facing off against your opponent all you can see is that person in front of you and all you should be able to hear is your corner.

For me, it’s like I get tunnel vision and my focus is just on the guy in front of me. Even the sound of the crowd seems distant and far away. I know at that point, that either it is going to be him or it’s going to be me. What I don’t want at this point is a hundred and fifty techniques or combinations flying around my head as I wonder what I should do next. What I do want, is to know that what I’ve trained has been drilled enough that it’s in my muscle memory and most importantly it works and it hurts them.

When it comes down to the ‘fight or flight’ response and Muay Thai wondering what to do next or what their going to do to you can cause a brief moment where you freeze up  or get a dose of ‘rabbit in the headlights’ as I’ve heard it called before. I’ve very nearly ended up there  once before when fighting and now and again when sparring with people who I know who are a lot better than me, I get that brief moment where I wonder what’s going to happen next and pause instead of attacking. Of course, I know the best way to overcome that hurdle and not let my nerves get the better of me is by focusing that nervous energy into what I want to do, whether that be a fast effective combination or a single powerful strike to change the game.

I’ve had a hit and miss week with training this week (more miss than hit due to a bad cold) but next week onwards I’m back at the gym as usual so it’s going to be good to be training hard again. I thought I’d leave you with another video this week this time highlights of Malaipet Sithprapom, a good example I think of fighting without the flight. Have a good week, train hard and as always..I’ll see you on the road.